A couple of days ago, I was on fire with Twitter.  I sent out 2 tweets and 2 likes in one day.  That's way more than usual.  Then I caught myself and thought, “Am I getting old and cranky?”

I know hardly anyone reads my Blog, but feel free to comment on if I'm on target with this next blog entry or if I'm just getting crotchety in my old age.

Now if you're not familiar with this Motion (it's not a Bill; my mistake), as I wasn't until a week before its debate, it's not good, at all.  Especially if you're a true Canadian, like myself, who actually gets a little riled up when Freedom of Expression is about to be infringed on for the wrong reason (spelled Social Justice).

Anyways, here's a couple of links about it:

To me, I find this highly disturbing that M-103 actually made it to a piece of paper.  All I heard about from the Liberals last election was how we have Canadian Values (of course, no one wanted to define any of these values lest being called a Regressive-Left-catch-phrase-of-the-day like xenophobe and/or racist).  Canadian Values are Western values (liberty, rights of the individual, etc) with a few more social safety nets.  Freedom of Expression (like Freedom of Speech) is where all other freedoms come from.  It's why, at time of typing this, I'm happy to be a Canadian.  And for me, who likes to make music, the last thing I need is anything that is supposedly legal, to impede my "expression".  My shrink said I needed an outlet.  Sorry, but in order of importance, Music trumps any organized Religion. Actually, I'm not sorry I said that. 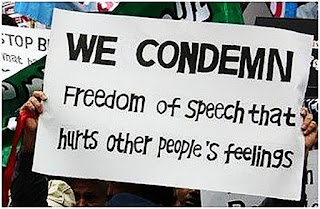 But things could change tomorrow.  Islamophobia, a term which I believe isn't clearly defined in this motion, is a lefty term that came out about 2 years ago (even my Spell Check doesn't recognise it).  If my pig-Latin serves me correct, it would be a fear of Islam.  Extremists actually gave me countless reasons of why I should be having fears, so it's not really unwarranted.  Here, let's visit the Government of Canada's Listed Terrorist Entities:

7 times, I counted the word Islam.  So I guess yeah, I would be a bit fearful of someone that said they were an Islamist.  Maybe I do have Islamophobia.  I'm not sure if you could blame me though.  I didn't see any Buddhist or Catholic groups on the list (adding to the proof that not all religions are the same).

So, although I didn't say anything wrong just now, I could be fined/charged for saying something like motion turned into a bill and eventually passed.  Sad, isn't it?  I could probably be fined/charged for pointing out that the majority of groups on the list are located in the Middle East.  I saw some African groups on there which surprised me since I thought Africa died of AIDS already.

The other problem with the MP is that she sounds just like a 20 year old, which makes sense since a 20 year old brain isn't fully developed, but apparently the identity politicking MP practiced law for a bit.  But a real lawyer should understand the concept of language in law and not use made up words like "Islamophobia".  Here’s her profile:

It's too bad, she's kind of cute.  I found it odd she sits on Human Rights committees yet has little regard for Freedom of Expression.  Her Member's secondary residence expenses was a little high too; you really should be living in your own riding.

Ah, heck, let's go through it now in case you didn't go to the above link:

"Text of the Motion That, in the opinion of the House, the government should: (a) recognize the need to quell the increasing public climate of hate and fear; (b) condemn Islamophobia and all forms of systemic racism and religious discrimination and take note of House of Commons’ petition e-411 (https://petitions.parl.gc.ca/en/Petition/Details?Petition=e-411) and the issues raised by it; and (c) request that the Standing Committee on Canadian Heritage undertake a study on how the government could (i) develop a whole-of-government approach to reducing or eliminating systemic racism and religious discrimination including Islamophobia, in Canada, while ensuring a community-centered focus with a holistic response through evidence-based policy-making, (ii) collect data to contextualize hate crime reports and to conduct needs assessments for impacted communities, and that the Committee should present its findings and recommendations to the House no later than 240 calendar days from the adoption of this motion, provided that in its report, the Committee should make recommendations that the government may use to better reflect the enshrined rights and freedoms in the Constitution Acts, including the Canadian Charter of Rights and Freedoms."

a) There is no climate of hate and fear to quell.  Actually putting those two words together as synonyms doesn't work.  One has fear because someone hates them.  Fear is a reaction to hate, if hate were a noun.  I'm not sure how you can legislate feelings and you certainly can’t force someone to respect you.  If anything is causing tension it's having information so readily available on the Internet that truths come out and they don't always favour the... um, err... the word before phobia.  Look up Dr. Bill Warner for some honest and unbiased views.

b) Condemn Islamophobia?  As I mentioned, it's a made-up term.  Can we condemn making up terms willy-nilly?  And systemic racism doesn't exist.  So far, there aren't any laws that discriminate on race or religion.  If you can find one, just one, please send me a link.  I won't be waiting for that e-mail since there aren't any laws like that so, let's all say it together: there is no such thing as systemic racism in Canada.  Point (i) is already done.  Here’s the irony though, if this motion makes it to a Bill and then law, this would be the first example of systemic racism in Canada, since it does favour Islam specifically and not the other organised religions.

Reading it back, the M-103 is an astonishingly nonsensical blurb.  MPs shouldn't virtue signal.  It's not their job and it's plain tacky.  I get your constituents are the same ethnic background as you but try being a person instead of using identity politics.  It's way more rewarding, honest, and would yield in more votes.

Me?  I personally couldn't care less what a person does in the privacy of their own home as long as I don't have to hear about it, and I'd expect the same towards me.  You shouldn't care about me because I probably won't bother you.  But if you do bother me, I'll probably push back in some way, like most normal people will.  We saw it a couple of times last year in other countries what push back does.

So as I mentioned above, me, who likes to make music, the last thing I need is anything that is supposedly legal, to impede my freedom expression.  Does this motion directly affect me?  No.  But this could turn into step 1 on a quick road to disaster.  Progress stops and things go backwards when you have to look over your shoulder before saying something honest.

But what I learned from Taoism, thankfully, is that nothing is sacred (a thing only has emotional meaning if you attach any to a thing).  Shit, ask Yoda.  But it's true, nothing is sacred, so If you can't take criticism, you're probably a useless person.  And if you’re getting criticized all the time, maybe something is wrong and the others are just pointing things out.  Just a thought.
Posted by Gregg Koval at 8:15 PM