My Teen Is Into Witchcraft And Tarot Cards — Should I Be Worried?

I'm not sure who's to blame, the person who wrote the article or the CBC for publishing it.  This is proof that no matter how unqualified you are to write about a topic, the CBC will publish it.  Then again, the CBC's articles are no better than the drivel you'll find in an issue of Salon

This doozy of an article was written (or speech to text) by Paula Schuck, and I was just going to comment on it.  If you’re thinking about writing about a topic that goes back for centuries, make sure you go back more than the current century for your research.

Witches are having a moment. From the "baby witches" on TikTok, who captured headlines in Rolling Stone for hexing the moon, to the resurgence of love for all things wizardly or the surging interest in tarot card readings — witches have been trending. 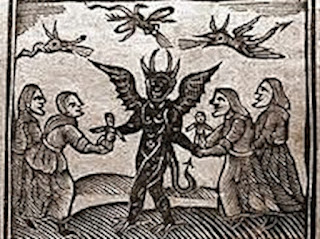 First problem: she’s using TikTok.  Sure it's a free country, and you can do what you want but I wouldn’t trust anything that started out as facial recognition software.  After reading the article, I know that research isn't the "author"'s strong suit.  Harry Potter's been around since 2001 and no one with half a brain would read Rolling Stone.  But there's no recent surge; it's always been there.

Right around the start of the pandemic, my older daughter started making spell jars, collecting crystals and watching lunar phases with extreme fascination. I watched from afar for a bit. I thought it was simply the natural progression of us watching the Harry Potter movies one million times from start to finish to keep busy and somewhat connected as a family since the lockdown started in March.

She crafted elaborate wands, and gathered natural materials and sealed them into small bottles. She ordered fake vines and hung them throughout her bedroom, and started talking more about the moon each time we walked. She gave me crystals, often ordered online, and told me about their properties.

I started to realize there was a bit more to this than I originally thought. Some of my teen daughter’s closest female friends were also completely enthralled. And some of my youngest daughter’s friends started calling themselves witches. At first, I was a bit confused by the appeal and I chalked it up to a developmental phase or interest — but this one hasn’t passed yet. So, I bought my eldest a book about witchcraft and I read a bit of it myself.

Witchcraft and an interest in New Age are two completely different things even though they'll probably lumped together in the same section at the bookstore to save on shelf space.  And the rest of the article has this dumb, naive tone to it, so get ready.

Recently, I overheard my daughter telling a friend of hers on the phone that someone online had told her she was going to hell for practising witchcraft, and I was a bit alarmed. (Can we all just agree that DMing people on social media to tell them they are going to hell for their beliefs, practices, religion, gender or sexuality is DONE. Both of my teens tell me they receive these comments at least once a week.) But I trust my daughter at her age and stage to handle social media trolls with a report and block kind of strategy, and she did.

Can we all just agree, as long as you're going to accept all DMs while you put up dumb shit on the Internet, strangers will bother you?  Anyways, if she was practicing real witchcraft, she's hoping to go to hell.  Witches do the Devil's handiwork.  Wait until her kids get into Satanism.

As her interest grew and spell jars multiplied, I started looking into witchcraft a bit closer, to unravel a bit of the mystery surrounding the topic, at least for my own knowledge and satisfaction.

Oh, good.  Paula's on the case of solving the riddle of witchcraft.  We should be in safe hands now.

Was being a witch in some way offensive? Was it inviting something negative into our home? Was it synonymous with devil worship? Should I be worried? What I found out is quite the opposite, actually. Here’s what I have gathered and why I'm not concerned if my kids use tarot cards or talk about spells.

In fact, modern witchcraft started to gain steam in England as a new spiritual and nature-focused religion in the 1950s. It was soon deemed "wicca," and its followers "wiccans." Someone who is wiccan follows nature-oriented worship and rituals, and sees it as a religion. And in wicca, they prioritize priestesses and celebrate the Goddess. 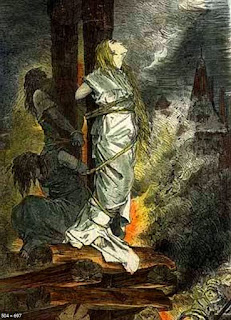 OK, Paula, get your time machine out and go back to Salem in the 1600s.  If your knowledge of history can't even go back 100 years, then you don't get to sit at the adult table on holidays.  "Was being a witch in some way offense?"  Why, yes, so much that women were burned at the stake for being accused of being a witch.  How empowering.  If you want to just go back to the 50s, make sure you mention there's more than just white witches, even though the number varies from website to website.  Wiccans are entirely different than someone who practices Black Magick and Traditional Witches don't consider Wiccan Witches to be real witches.  More like a Witch-lite.  Paula would probably faint if she ever got a hold of a copy of Man, Myth and Magic.  Or watched a Hammer movie.

Good thing I have these things called books that don't get updated with strangers' opinions.

A nature-oriented religion that’s also female-centric? When I think about it like that, there's no wonder why young women gravitate towards this experience in 2021.

It's not female-centric, it's about the feminine.  Also, it's about balance in nature, meaning you'll need the masculine aspects of it too.  I'm not even a witch and I knew that.  Paula probably thinks the yin-yang symbol is a pre-60s paisley design.

I don’t think I need a PhD in adolescent psychology to recognize that making spell jars and watching the lunar phases with fascination at this particular time in history is, at least in part, a reaction to the lack of control that teens are feeling. With a health threat at the door, political divisiveness and a president south of the border who nurtured hatred for four years inciting violence amongst his followers, plus the Black Lives Matter and #MeToo movements — there's a lot to worry about daily, and I think teens need something hopeful that also provides a sense of community.

What the hell is she talking about?  Her not having a PhD is pretty clear, but people like esoteric things because they're cool.  But you can attach any meaning you like to a crystal but how they refract light is just cool looking.  I'm not sure why activism got dragged in to this shit article.  Is there something on the other side?  I'd say yes.  As far as moon phases, I don't think anyone watches them with fascination, unless you're really bored and have a 4 weeks to spare.  People have been using moon phases as a guide for centuries, from best times to farm to the best times to fish.  Buy an Almanac for crying out loud.  There's "a lot to worry about daily" if you get your news from Facebook.

Growing up during a pandemic is chaotic at best and isolating, anxiety-inducing and depressing often. School basically doesn’t exist in any format that makes sense. It’s no longer an option to see friends in person and remote learning can be flat.

"Growing up during the pandemic"?  At the time this was published in January, it hasn't even been a full year of emergency measures yet.  Last year at this time everybody was making Corona beer memes.  People will look back in ten years and say, "Oh yeah; I almost forgot about that except that I got debt from my relief cheques that I still got taxed on it."

So, who does it harm if the teens study witchcraft or call themselves witches?

The other night while we were making dinner, my daughter blurted out: “Magic would be so useful right now!” We were chopping a particularly hard batch of sweet potatoes. After a day spent grumbling at all of us, snapping every few hours and a return to remote learning, that comment struck me as exactly why witches and potions and tarot cards are growing in popularity. The belief in something that is a higher spiritual concept can be comforting. Don’t we all wish we could magically blast COVID-19 off the planet?

Her kid was trying to have some fun saying cutting potatoes sucks balls and wished she didn't have to do it.  Her kid wasn't thinking of "a higher spiritual concept", her kid didn't want to cut potatoes.  I wish we could magically blast poor articles like this off the planet.

A friend of mine who lives in B.C. chimed in last week when I asked if anyone else had a teen who was making spell jars and learning to read tarot cards. She had a unique take. “When we were young, it was Dungeons and Dragons. People could spend hours getting lost in that elaborate fantasy game. I don’t see it as much different than that really,” she told me.

It's not a unique take, it was uninformed opinion.  I need someone to explain to me how a Role Playing game is the same as Witchcraft.  Please, leave a comment and let me know what a Traditional Witch's armor class is.

Some have speculated that the rise of witchcraft has evolved from feminism. The word "witchcraft" conjures up a divine female power. A young witch on a news segment I watched referred to the word itself as an acronym: Woman in Total Control of Herself. What a powerful idea!

"Some have speculated that the rise of witchcraft has evolved from feminism".  Who, Paula's friend from BC?  Witchcraft is much more interesting and profound than anything feminism has to offer.  Also, it's been around hundreds of years before feminism was a thought.  After reading this article, I wonder if anyone who writes for the CBC has an IQ above 80.  D&D is the same as witchcraft; witchcraft evolved from feminism: two of the stupidest things I read all year.

So, if being a witch is something that is in some way empowering to young women right now, then I say embrace being part of a coven.

I'd say knowledge is power to anyone, and Paula is lacking knowledge on a lot of fronts or she’s being willfully ignorant.  The problem with articles like this is that someone might read a garbage article like "My Teen Is Into Witchcraft And Tarot Cards — Should I Be Worried?" and think it's contents are based on at least a few facts.

My advice: if you're interested in a topic that started before the 1990s, then buy books on it to get the real story.