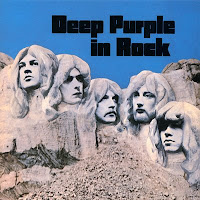 25 years ago today, I first heard Deep Purple In Rock. I remember the date because it was my Brother's Birthday. My Grandma would buy something for me on my Brother's Birthday and she would buy him something on my Birthday. I think no matter what, back then, it was always an album. Before CDs came out, over half of my Deep Purple collection came from her - and she doesn't even like them.
Anyways, I haven't been the same since. I still say it's the "hardest album" ever made. Not sloppy like a MC5, not slow moving like a Black Sabbath album, not a rip-off like a Led Zeppelin album (I can't get over their rip off of Small Faces). It's well played and hits hard. Even the weakest song on the album (to me), Child In Time, has probably the best guitar solo on record circa 1970.
So how does it sound today? It got a whole lot better since the Remaster came out. One of the most noticeable remastering jobs on any CD, maybe because the original US CD sounded that bad.

So, if you haven't heard this album for whatever reason, pick it up and you'll wonder why Led Zeppelin and Black Sabbath are more popular.

And I still think the cover is amusing.

Favourite track after all these years: Bloodsucker.
Posted by Gregg Koval at 10:24 AM