ADD Journalism with a Message (or Messages)


Here’s an interesting article that came out last week with the title: “Campaigners push Liberals for $15 minimum wage in Ontario”: http://www.cbc.ca/news/canada/toronto/15-minimum-wage-ontario-1.3940676?cmp=rss 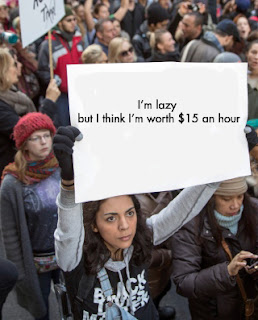 There's so much wrong with this article's content and how it was written.  It's 3 articles in one: Minimum Wage increase, Social Justice and some Basic Income thrown in at the end for good measure.  I'm not sure if Mr Crawley from the CBC has ADD or tries to get paid by the word.
After reading this multi-layered "awareness" article, I'm still not exactly clear on how $15 an hour equals fairness like the supporters' logo reads.  But Fairness for who

Let's look at the wage increase first and see where things will go wrong:

Once minimum wage goes up, so does everything else.  I guess that's fair in some respects.  A couple of months ago went minimum wage went up to $11.40 an hour, what did Silver City do?  Increased their ticket prices to compensate for their employee's wage increase.  And they're not the only ones to raise their prices.  It ends up being that no one comes out ahead and things are relatively the same as before the hike.  Do you think Universities are going to lower tuition?  Not when everyone’s going to be making $15 an hour.  Cigarettes will finally be $15 a pack, since the price of a pack of cigarettes has always been relative to minimum wage (sorry, the Government doesn't want you to quit).  Do you think your Hydro bill won't increase or your Bell/Cogeco/Rogers bills will still stay the same?

Another point is most people will strive, or want, to make more than Minimum Wage and this will destroy that.  Here's a good one:  Person A works hard at their job and as a result, already makes $15 an hour; 4 more dollars an hour over minimum.  If minimum wage goes up to $15 an hour, do you think Person A is still going to make 4 more dollars than minimum?  So all that extra effort and hard work basically means nothing.  The person that works hard for the extra is now in the same league as a lazy shithead who doesn't want to work as much and expect the same.  Rewards for the bad, punishment for the good.  That's the message this carries.  And chances are, Person A is going to think, "Why the hell am I going to slug it out when I don't have to?  I quit."

A $15 Minimum Wage devalues the currency and what the worth of work is.  And it's just pricing unskilled labour out of a potential job.  Let's say you own a small business, would you hire 2 people at $10 an hour or hire 1 person at $15 an hour and be short staffed?  We already saw what the last Minimum Wage increase did at McDonalds: they now have self-serve kiosks.  There's more return on investment and the orders are correct.  And less workers.

It's obvious that Pam Frache (provincial co-ordinator of the group Fight for $15 & Fairness) didn't take Economics 101 or tried to start a small business of her own.  She'd make a great MPP.  Her comment of "This government has committed to a social justice agenda, to a decent work agenda" is half right.  The government is so committed to Social Justice (the term is an oxymoron anyways) that it hasn't done anything properly in years.  The SJ agenda doesn't work and it never will since it's fundamentally flawed.  Equality of Outcome is not a good plan. If you really want to live in a socialist society, go somewhere else and stop trying to ruin things for the majority of us normal people.

Anyways, her following quote of "Ontarians have high expectations that this government is going to do the right thing" leaves me scratching my head too.  The current Premier has a lower approval rating than Charlie Manson.  Pam, people do not have high expectations of the current Ontario government because it's well-known they're a bloated joke and Social Justice is one reason why the GOO won't win the next election.  And the NDP are just as useless.  Hopefully, the winners of the next election will make some amendments to the anti-democratic Ontario Human Rights Code (or just get rid of it).

But Social Justice, as retarded as it is, doesn't have anything to do with a wage increase.

"Figures from Statistics Canada show that 9.2 per cent of Ontario's workforce — some 540,000 people — earn minimum wage. The campaigners estimate that nearly 1.5 million workers in the province earn less than $15 an hour."  I'll take my info from Stats Canada over people holding up signs claiming to be victims.  I guess the good news is that the other 90% of the workforce is currently making better than minimum wage.  (If you did a Population divided by the 1.5 million, it's pretty close to 9 percent, but the total population isn't the entire workforce.)

Then the article ends on trying to conflate Basic Income with Minimum Wage.

Trust me, I don't mind a social safety net, but that's what it should be - a last resort.  Basic income is just welfare with a different name because it's not PC to call it Welfare anymore (Custodial Engineer, anyone?).  The government's role is to protect its citizens, not bail out people who are poor with money (using money from people who are good with money) and make them lazier.  Some of this could have been avoided last Provincial election but Tim Hudak was such an idiot he confused "less government" with "I'll lay-off so-many-thousand civil servants".  Or he got bought out.  Either way, he's still an idiot.

This is one poorly written article putting 3 unnecessary and unrelated things together.  Anyways, raising minimum wage this much and this fast is only going to cause problems.  We'll see how this plays out but it won't be for the best.
Posted by Gregg Koval at 12:51 PM