It's Not About Hate Speech - It's About Speech They Hate

Two wrongs don't make a smart Heritage Minister.  Why is the Canadian Government wasting time creating a solution for a problem that doesn't exist?  The Judas Party of Canada, the party that seems to hate Canadian Citizens, ironically tables an Anti-Hate Speech Bill.  I was kidding, it's not ironic: they really hate you or this proposal wouldn't even be a thought.

This is going to be a multi-parter blog entry because there's so much wrong after wrong here, I can't fit it into one entry.  The main focus of this entry is from here, the introduction of Bill C-36:

"Canadians expect to be safe and free from hate speech and hate crimes, online and offline. The Government of Canada is committed to keeping all Canadians safe, while also protecting their rights and freedoms."

I know why I haven't found a definition of Hate Speech in Canada; it's because in bullet-point 2, "this Bill will add a definition of Hate Speech".  So while the title implies it's about Hate Speech, it hasn't been defined yet so the Bill is not really about Hate Speech.  I'm glad that's out of the way.  As far as offline hate speech: let's be clear that kids spraypainting a backward swastika on a rock in the middle of the night at the park is not a hate crime.  If you think it is, you should probably get off Facebook for awhile.

Maybe it's my age but if I've ever received genuine hate in a text, tweet or an e-mail from a stranger, I wouldn't think much of it because some stranger's feelings about me isn't something I would dwell on because it's not healthy.  Sticks and Stones anyways.

This proposal magically appeared a couple of days after Bill C-10 was passed in the House at 1:30 in the morning.  Most crimes happen at night.  Bill C-36 will be a lot worse because of its content since it creates a bigger problem than it tries to solve and will have real serious (and terrible) consequences for pretty much every Canadian.  It must be all that Equity talk they throw around.

"Too many people and communities in Canada are harmed and victimized by hate speech, which is often amplified and spread online. Online hate can turn into offline hate with devastating impacts on communities and families. We have a responsibility to victims to take action to combat hate online and continue to build a more inclusive Canada."

How many?  A whopping 1,946 out of 38,000,000 people (that's about .005 percent; rounding up, that's 0%).  You may as well say that there isn't a lot of hate going on in Canada.  That's something to be quite proud of, actually.  That is until something like this passes.  Because it will.  The Senate is too complicit to do the right thing.  I've seen them cave on Bill C-16 and I wouldn't expect anything less again. 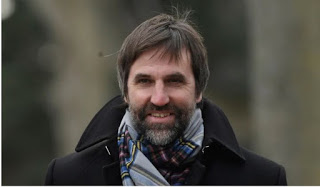 The offline part is ridiculous and where it obviously goes too far but I wouldn't expect anything less from the Dishonourable MP Khunt (Gilbeault; see above pic) to be all for this.  As a note, he's quite proud of himself for doing all of this harm.  Then again, all activists are self-centred assholes.  I hope he doesn't spend his thirty pieces of silver all in one place.  Basically, this proposed bill says it's OK for a start ratting out someone on a conversation they eavesdropped on.  There are low-lifes out there that love to be a malicious rat because they think they're appearing to do something virtuous.  Being a rat is not a virtue and honestly, snitches deserve stitches when they stick their nose in other people's business.  And who wants to hang around with a tattle-tale?  No one.

I had a good laugh at "The Government of Canada recognizes the importance of freedom of expression for all Canadians and is taking a balanced and targeted approach to tackle the most extreme and harmful speech."  This whole thing is the antithesis of free expression and there is no balanced approach.  Targeted, yes, but there's no need to "balance" Freedom of Expression with anything.  It works fine on its own if you leave it alone.

"A 2020 study conducted by the Institute for Strategic Dialogue Global concluded that Canadians were using more than 6,600 online channels, pages, groups and accounts across several social media platforms to spread white supremacist, misogynistic or other extremist views."

Who the hell is the Institute for Strategic Dialogue Global and why are they going through people's social media accounts without their knowledge?  The Government of Canada has to fabricate white supremacists: https://ottawacitizen.com/news/national/defence-watch/canadian-military-to-establish-new-organization-to-use-propaganda-other-techniques-to-influence-canadians.  Misogyny (Misandry apparently didn't make the cut) means making feminist jokes anymore so that shouldn't count, and "other extremist views" could mean anything right of far-left. I would say, judging by these selling points, and the 0% online "hate crimes", that this Bill is totally unnecessary.

The real point of this bill is to silence the opposition, just like Bill C-10 would work well for the CBC (instead of opposition, it would be competition).  This really has nothing to do with the undefined Hate Speech.  This is all about not being able to criticise the government for the poor job they're doing.  It's not Hate Speech but it's speech they hate.  The easiest way to combat criticisms is to do a good job and do the right thing, but the current federal government either knows they're inept at their jobs or they're up to something that not one single person will like.  I guess that is the same thing.  Think I'm losing it? https://www.the-sun.com/news/3002400/putin-sign-extremist-bill-banning-critics-elections-fears-gaddafi/

Should anyone pay a fine for criticizing or insulting another person?  Of course not.  Any sane person knows that.  The sad thing is, if that Bill ever gets Royal Ascent, this Blog entry (and probably a couple others) would be considered Hate Speech.  Isn't that sad?

The Quote section was interesting: "“Canadians expect their government to take action against hate speech and hate crimes."  I've learned over the years that I wouldn't expect the government to take action on anything.  They couldn't even handle a pandemic properly and they've had at least 20 other countries to use as models as to what would work and what wouldn't. F-

Once information goes up on the Justice Department page, then I'll go through it like the Bill C-10 blog entry I did.  I'm sure there will be plenty of inconsistencies.  If an unfinished Bill like C-10 will pass the House, garbage like this will too.