I wondered if C3PO got a job with the Government of Ontario last week?  I can hear his voice saying, "Shut them down.  Shut them all down".

C-3PO may be a fictional character but he sure is smarter than anyone currently accepting bad CoHIV advice at the provincial level.  And C-3PO wouldn't be getting kickbacks either.

It's another round of lockdowns that didn't really need to happen.  If anything, it's the time to open up everything.

Everyone will get Omicron.  That's what the professionals are saying.  Professionals; not a dog hating desk jockey with a share in Moderna.  This is the perfect time to catch the CoHIV, especially if it's as mild as they (the professionals: doctors and such) are saying. 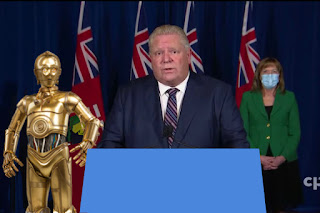 Here's how a dumb guitar player (myself) would approach this: open everything up - no indoor restrictions; everyone catches the "cold"; a couple of weeks later, everyone's good and there's no need for a booster.  Not that boosters don't work, but they should be used on old people that could benefit from it (even though the booster doesn't target the Omicron variant - that's supposedly coming out in March).  Everyone doesn't need a booster.  Pfizer shareholders might disagree but everyone is different.

And then everyone can go back to a time where you didn't have to wear a silly mask and look like a bank robber all the time.  No "mandatory" QR Codes to use on closed stores and restaurants.  No more knee-jerk decisions.  Life's good.

The excuse for the lockdown is so hospitals don't get overwhelmed.  There's two things that didn't have to happen: firing of the hospital staff (oddly, your average "Liberal" is good with that).  The other thing that didn't have to happen was not building ICUs during the summer lull.  For an example, where I work, they're currently building condos in the area.  A four story condo building took a month to erect.  Imagine if someone was building more ICUs so it wouldn't strain the hospitals?  They had 2 years.  Then you could have more hospital rooms, and staff (if they weren’t wrongfully dismissed) to work in them.

And by the way, on the Federal level, can someone fix the Prime Minister?  He just an embarrassing dumbass.  Anyone that publicly says antivaxxers "do not believe in science, who are often misogynists, often racists, too", isn't capable of running a bath.