I love hockey and I love the Boston Bruins (17-2-0 at the time of writing) but I can't say the same about the current direction of the NHL.

Now, if I was in charge of the NHL, I would only tweet about hockey.  Pretty simple.  There's lots to tweet about: the previous night's scores, player milestones, etc.  But now you get garbage like this: 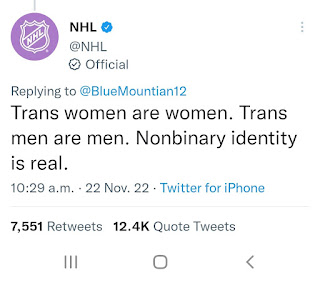 If I want to be lied to, I'll start dating again.  Spoiler Alert: people that say they're Non-binary are basically saying they're so unattractive that no one will sleep with them, but what does that have to do with hockey?  Right, nothing.  It was cringey when the NHL did the Kumbaya hand-holding a couple of years ago and this isn't any better.  Hockey is a competitive team sport, not group therapy for sissies.  Then I thought, why am I paying to watch a hockey league that's not even focused on hockey anymore?

The NHL site even has a Diversity & Inclusion Report section, where the NHL "... is intentionally seeking a greater diversity of experiences throughout hockey, whether you are in it to play, work, or watch."

Why?  We may never know.  I'd focus on keeping the existing audience and maybe growing it but this is how you repel potential and existing customers.  There's only a handful of diverse experiences you can go through watching any sport, the two main ones being: happy when your team wins; letdown when your team doesn’t win.

"Since January 2020, the League Office and all 32 NHL Clubs have pursued with new urgency a variety of initiatives to make our game more welcoming, inclusive, accessible, and socially conscious. The information in "Accelerating Diversity & Inclusion: NHL Report on Strategies, Initiatives, and Progress" benchmarks the League's approach to D&I over the past few years with qualitative and quantitative data, following a "7 Dimensions" framework that shows the work underway across leadership, education, employment, marketing, partnerships, participation, and community engagement."

Makes sense.  2020 is when everyone stopped watching since no games were played because of the Lab Leak.  Watching sports used to be an escape.  It's not the NHL's job to be socially conscious because they don't do it well and they're already on their way to being another sports league that nobody wants to watch.  That's not a very good strategy.  One thing the NHL might figure out is that the people that they're trying to pander to don't spend money.

I'm pretty much an average person, so what does the NHL's Diversity and Inclusion direction mean for regular hockey fans like myself?  If the NHL really wants to make the league more accessible, then show more games over the air.  Not even NBC is showing NHL games anymore.  Having to pay either ESPN or Sportsnet to watch hockey isn't what I would call accessible.  Also, if the only place I can watch hockey is through 2 corporations, I wouldn't call that very inclusive.  Being excluded doesn't make things any more welcoming.  So far, I'd say this isn't a very good plan.  It doesn't attract eyeballs or dollars.

People stopped watching the other National leagues once they started going woke so I don't know why this would be any different for the NHL.  Remember when Gary Bettmen came in and his goal was to spread the NHL to more US markets?  Canada has a built-in market already but the NHL in the US had to compete with the NFL and NBA.  And he did a great job as far as that's concerned and it worked well, up until I guess January 2020.  Imagine doing all that work, then to have it all pissed away because of something un-hockey related?  Maybe when the league shrinks down to 28 teams in the next couple of years it'll sink in to the higher-ups that maybe all this diversity and inclusion isn't bringing in the viewers or the dollars after all.

I currently have a good bit of disposable income but I'll be spending it somewhere else.  I'll still root for the Bruins but I won't be giving a dime to the NHL.