Re: Cap'n Crunch sails into obscurity. 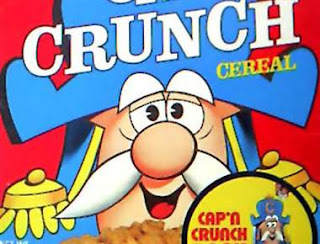 What's with people these days? Some how Cap'n Crunch is being blamed for obesity and thanks to Pepsico (whose Cola has more sugar than their cereals), the problem won't get fixed AND we're out an American Icon. I know, I'm not from the States but still. I used to eat that stuff for years and guess what? I'm not fat.

There was also "pressure from the White House"?  Shouldn't the White House tackle important things?  I'd expect this kind of stupidity from the current Ontario government since they run things like a bunch of bad parents. On that note, parents shouldn't really be in charge of making the bigger decisions.  They always miss the bigger picture and can't think objectively.

It's too bad we have these types of people running things. Somehow, it's the cereal's fault. I'm sure Pepsico has lots of parents with fat kids. And then some broad who doesn't really have a title (maybe she's a receptionist) from the Rudd Center for Food Policy & Obesity at Yale University, says: "...you could say that they have retired Cap'n Crunch, and that's a good thing," Thanks for the babble.

It'll be a sad day when I walk down the cereal aisle and there's boxes of 'Flax Seed for Kids' or 'Oat and Buckwheat Bits for Kids'. Kids will slim down alright since they won't eat it. I'm just kidding, you can remove all the kids cereals from the shelves but you'll always have fat kids.

So long Cap'n Crunch. You're way smarter than the people that got rid of you.
Posted by Gregg Koval at 12:15 PM