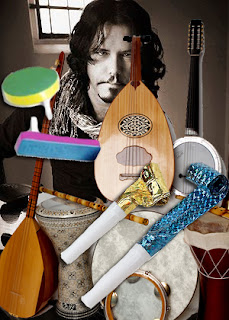 If that link doesn't work, I copied and pasted the whole article underneath anyways so you can read what a dumb-ass says during an interview.

I never liked this guy.  He's like a white Kanye only less important.  That's a feat unto itself.

We went to the same school.  I say that because normal people, like me, went there too and not just conceited twats.  And he wasn't much of a guitarist either, although he did have some nice gear.  Before he started the band he used to be into New Wave (y'know, that really aggressive, guitar-orientated music).  He must have gotten teased a lot since he did a 180 and all of a sudden wanted to become Jimmy Page...if Jimmy Page wore pirate shirts.  A little late in life to be changing your "roots".  I'd you hear little tidbits here and there since a couple of people I know used to actually listened to and/or know them, and I've never heard stories about someone trying so hard to be cool.  He's still not there yet. And of course I had to hear some of their stuff at some point but it only confirmed one thing: If I had to pick a Led Zeppelin parody band, I'd take Dread Zeppelin over The Tea Party.

So let's have a look at the "interview".  Some of my favourite lines are:

"I've been travelling the world ... and going to places unknown, like Lebanon, Turkey, Morocco, Egypt,"
Actually, I've heard of all 4 places and never been to any of them.  Maybe because they're not on the Risk board that they seem exotic to him.

"As far as a rock trio is concerned, has there ever been a band in Canada that has been so adventurous, as far as instrumentation and actually achieving it?"
Well, throwing a bunch of eastern sounding instruments over loops isn't really my idea of adventurous.  And I'm pretty sure that Stu, the talent of the band, put all the samples and loops together.  If Plant/Page's No Quarter never came out at the time, their Edges of Twilight CD would have sounded like another uninteresting rock band.  But ripping other people off from a different country first doesn't make one original.  Also, I'm not a Rush fan but I'm pretty sure 2112 is a little more adventurous than a Tea Party polished turd, and that came out about 20 years earlier.  And Rush didn't have to resort to using silly instruments to make up for weak songs.

"Usually, maybe six times out of 10, the second record is a bit of a letdown."
OK, not a Math major.  We all know it should 3/5 but maybe he thinks he's not the lowest common denominator.

"And I listen to the Doors' music now — because I was never, believe it or not, a big Doors fan — and I respect what's going on, it's cool, but all that circus organ music? It's a little scary."
That should have been the headline for the article: Sissy Pants Gets Scared By The Doors.  They did more than just a few Doors songs back in high school/college.  I'm guessing he was trying to be funny with the I-play-guitar-better-than-Jim-Morrison bit but I like apples and apples in a comparison.  That's like saying I eat healthier than my telephone.  Exactly, it's not funny.

"I would hope," he says, "that Windsor feels very proud of the achievement that these three little boys from LaSalle, Ontario have done."There was a line in the article that said something about his "devil-may-care honesty".  True, the devil may be the only one who cares.  Jeff was pretty silent about being from Windsor, let alone LaSalle, when they were starting out.  They moved to Toronto for a reason and that was so they could say they were from Toronto.  It's a nice bullshit line, but I'm not proud of what they've done.  I'm sure he is though.

Kids, don't ever mix cocky and insecure or you'll wind up like this clown.  And for God's sake, never think you're better than someone for making something that was ProTooled 20 years ago, especially if you haven't done anything since.  If you can't better anything you've done 20 years ago, it's time to hang it up.  Also, if you know you're going to be doing an interview, dry out for a couple of days first.

Lots of lessons to be learned here.

*I just wanted to point out that while Jeff hacks on The Tragically Hip, they've actually sold more albums in Canada than the Tea Party has globally, and that Platinum sales means 300,000.  The US is the only country that still considers Platinum Album sales to be at 1,000,000.


TORONTO - After a quarter-century helming the Tea Party, it would seem that Jeff Martin has tossed any measure of false humility overboard.

Though he's chatting over the phone from his adopted home of Australia, the shaman of multi-platinum mysticism projects a certain twinkle in his voice as he reflects on his band's ongoing career with barbed candour.

For instance, as the conversation turns to the Tea Party's place in the Can-rock hierarchy — after four double-platinum albums and another two certified gold — he doesn't conceal his pride.

"I've been travelling the world ... and going to places unknown, like Lebanon, Turkey, Morocco, Egypt," he says.

"No one knows who the Tragically Hip is in Istanbul. They know damn well who the (expletive) Tea Party is.

"And what an accomplishment."

In more ways than one, Martin isn't finished.

His band's legacy ballooned largely on the strength of 1995's "The Edges of Twilight," by a narrow margin the band's most popular release and the album that the band will celebrate on a cross-Canadian tour beginning in their native Windsor, Ont., on Friday.

And if Martin comes off brash now — well, that was the mindset that likely made the adventurous, 20-year-old album possible in the first place.

Martin, bassist Stuart Chatwood and drummer Jeff Burrows had noodled around in bands during high school before assembling more formally in 1990.

After self-releasing a recording in 1991, they signed to EMI and issued their major-label debut, "Splendor Solis," in 1993. Produced by an inexperienced 23-year-old Martin, the album was minted platinum.

For the followup, both expectations and the band's budget sprouted skywards.

"We had never seen five-digit paycheques in our lives," Martin says. "We just reinvested. Because we were just three kids out of Windsor."

As they recorded "The Edges of Twilight" in Los Angeles, "every single day there was a courier showing up with instruments," Martin recalls.

When lead single "Fire in the Head" — inspired by Tom Cowan's book of the same name and Martin's love affair with an Australian Wiccan — seethed a path to No. 26 on the Canadian chart, it became clear the investment was worthwhile.

"Have you heard of the sophomore jinx?" Martin asks rhetorically. "Usually, maybe six times out of 10, the second record is a bit of a letdown.

"What 'The Edges of Twilight' became," he continues, "was a very, very staunch statement."

It's not the only time Martin queries his interviewer.

In fact, Martin pre-emptively asks the first question of the conversation: "As far as a rock trio is concerned, has there ever been a band in Canada that has been so adventurous, as far as instrumentation and actually achieving it?"

The question is met with stumped stammering, and Martin has made his point.

And yet, much of the discussion about the Tea Party in its heyday focused on the frontman's physical resemblance to Doors leader Jim Morrison.

If that comparison rankled Martin in his 20s, it's certainly grown no less tiresome in the intervening 20 years.

And it's the topic that inspires Martin's next bout of devil-may-care honesty.

"Here it comes, here's a big statement, but you know what, I can do it now, because I'm going on 45 years old," he begins.

"Jim Morrison was just a (expletive) kid. Twenty-seven-year-old. And his poetry wasn't so good. Now, I've outlived him, I certainly play guitar better than he ever could.

"And I listen to the Doors' music now — because I was never, believe it or not, a big Doors fan — and I respect what's going on, it's cool, but all that circus organ music? It's a little scary."

The comparisons were pervasive (and dismissive) enough that Martin recalls coming home to Windsor and having his upset mother ask: "Who's this Jim Morrison guy?"

She died a year and a half ago, and coming home now can be a "little bittersweet," says Martin.

Still, he enjoys spending time with his father and seeing friends and hopes his hometown knows all he's invested in the Tea Party.

"I would hope," he says, "that Windsor feels very proud of the achievement that these three little boys from LaSalle, Ontario have done."
Posted by Gregg Koval at 8:55 AM