The Force Gets Taken 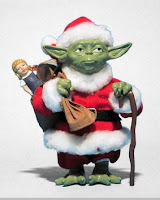 It's the holidays, and there's nothing like wasting a whole day having a Star Wars marathon.  It's a holiday tradition.  But this year, with all the hype, I'm going to have my own personalized marathon... and it won't end with going to see The Force Gets Taken.  I'll wait for Netflix for that.  A Star Wars movie made for 20 to 30-somethings is a terrible idea, even on paper.

Anyways, this year's special marathon will take more than one day because it'll have to.  Here we go (in order):

The theme with the list: it's all George-approved and that means it is genuinely Star Wars.  Oh, and the story is all done, just in case some crybaby with a YouTube channel accidentally stumbles across this post and needed to be reminded.

Getting to The Force Cliches, I never planned on seeing any of the Disney movies because, as I said in the last paragraph, the story is all done.  Also they have an excellent track record of ruining a good thing.  But as someone who is interested in how other people can take an idea and get creative with it is always interesting (must be from playing in bands), so I have been watching the trailers and some of the YouTube overjoyed geeks, and way too many YouTube clips with "Spoiler Alert" in the title (only to hear after watching 30 seconds of it, the host saying "but I don't really know for sure...") still made me think, "maybe I'll see it when it comes to Netflix".

Anyways, the other night, I went straight to YouTube and searched for anything with "Reviews" and "Spoilers".  Sure, I already cringed at the politically correct cast, and then hearing that it's the funniest Star Wars ever (because all war movies should be funny) and that the new ex-Stormtrooper pals around with Han Solo and is supposed to sooo be funny.  So now we have 48 Hrs in space?  And the character names...what garbage.  Kylo Ren?  That's about the least intimidating name I've ever heard for a villain.  Also, he looks like Plo Koon from the Clone Wars.  And I heard he cries.  For the people who are going around saying "he's the best Star Wars villain ever" might want to go and look up what villains are supposed to be like.  Real villains don't cry.  But don't forget, it's "the Star Wars fans have been waiting for".

But here's the odd thing: any "spoiler free" review: after the gushing about this non-event of a movie, there was always a "...but, I did have a few issues with it....".  I read those after I went through the spoiler reviews which confirmed almost every reason why I was going to avoid this movie in the first place.

All of the spoiler reviews had the same theme to them: the new movie is basically Star Wars Greatest Hits, but were unwilling to admit it was a plain old fashioned rip-off (actually, most of these people get defensive when the movie is called out for what it is).  My biggest peeve was hearing, (are you ready?), there wasn't anything new to the story and it all felt familiar.

So I'm beginning to question all of these YouTubers/ Star Wars Fans that are praising the new movie, and still saying there's way too many references to the original Star Wars (they like saying "homage" instead of "rip-off").  Which leads me to: are you guys really Star Wars Fans at all?  I'm referring to the people that will go out of their way to hack on half of the movies in the series (Prequels) for whatever reason yet still say the love Star Wars.

Let's put it this way:  You Star Wars "Fans", who claim you grew up with it (probably on DVD), just love it to pieces, think it's the best thing ever created, dressed up like the characters for your wedding, still sleep in Star Wars bed sheets and pajamas, yet were real quick to hack on all three Prequels because they didn't "feel" like Star Wars, are now complaining that while the new Star Wars "feels" like the old trilogy, there wasn't anything new....

You lousy pieces of shit.

15 years earlier, George Lucas, the creator of Star Wars, the only one on the entire planet who knows, intimately, what Star Wars is about, gave you "fans" 3 2-hour movies; about 7 hours of completely new visuals and stories.  He stuffed your head full of "new" and "interesting", and then you shit all over him in message boards because it didn't "feel" like Star Wars to you or it wasn't the "Star Wars" you wanted it to be?  It's impossible for the Prequels to be anything but Star Wars, you morons.  No wonder why you Star Wars "fans" are all losers: you're mentally 12 year olds in 30 year old pasty carcasses or worse, 40 to 50 year old carcasses.  You "fans" were quick to post things like George sucks and he doesn't know how to make a film, etc but you wouldn't have a clue how to be creative in your own lives.  If you made it to the Prequels at the theatres, I'm surprised no one held your hand getting you there.

Yoda had a great quote in the Prequels to describe you "fans": "How embarrassing".

If I had "fans" like that, I'd start learning the piano just so I wouldn't have to hear shit-head comments coming from a group of defensive shit-heads.  Which is basically the same thing that led George selling it to Disney.  He had enough of shitty "Fans" and probably wanted to start hearing comments and criticism from real people, or people who know something about movies.

And you "fans" ruined it for the rest of us that genuinely liked all 6 movies because when I look at the Coming Soon section for movies, there's another needless movie, sans lightsabers (for you "fans", "sans" means "without") coming out next year, 2 further needless movies about dead OT characters, and 2 more needless sequels.  Thanks, assholes.  Maybe you should learn this phrase: "leave well enough alone" or "know when to quit".  I'd leave you with some more advice but you wouldn't know what to do with it.

JJ Abrams is no better.  I'm not some movie lamer that will go see a particular film because of its director, but somehow I knew he'd pull the same weak bullshit as he did when he just ruined Star Trek, especially that last one.  I don't know how a film maker can be so lazy and non creative and rely on switching lines with different characters.  Oh, I know why: because he says he's a Star Wars Fan.

I felt bad for George that he had to sit through of a repackaging of his own movies and probably had to hear, "So?  What did you think?" at the end of it.  To his credit, he was polite but probably wanted to punch JJ in his smug face for being a Rip Off Artist instead of a Movie Director.  I'll bet George didn't even get a writing credit.

On second thought, I think I'll skip when it finally comes to Netflix.