If you talk to kids born after 1990, they think vinyl is cool.  Old-timers will refer to something called "The Vinyl Experience" that kids also think is cool.  "The Vinyl Experience" is the "ritual" (I've seen that word used) for physically holding the record, looking at the cover, taking the record out of the sleeve, putting it on the turn table and then some kind of aural nirvana is reached.  That takes about 5 - 7 seconds but apparently it's an experience.

Let me tell you about my latest vinyl experience:

Last week, I ordered Black Sabbath's Technical Ecstasy with white coloured vinyl from Amazon.  I cringed when I saw it was made by Rhino Records but it was the “cheapest” of all the coloured Black Sabbath records so I thought, "why not?".

The record came in damaged, so thanks to Amazon for their piss-poor shipping practices on that one.  How poor?  Have a look at the picture.  Some genius at Amazon thought that shipping a record in an oversized box with mini air bags thrown in there should be sufficient.  And here's how the record turned out.  Surprise.  They may as well slapped an address label and a stamp on the album and thrown it in the mail.

Getting back to the experience, I take the cellophane off and pull out the album from the damaged sleeve.  The white vinyl sure does look cool.  I put the album on the platter, close the dustcover and hit Start.  Surprise, the song skips.  Hmmm... it also sounds kind of wonky, not unlike being on a boat.  Stop.  Open the lid.  Ah, the record's warped; about an inch high on one quadrant.  Have a look at the picture. 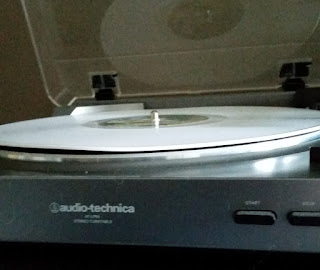 I didn't listen to the rest.  I put the warped album back in the damaged cover and put on the CD since I was in the mood for listening to the songs.

That was my latest vinyl experience.

Why the experience was so poor was because I purchased a record made by Rhino Records.  I have more botched "new" vinyl from Rhino than any other company in my record collection.  And I'm blaming Rhino because their name is on the label.  Frankly, I don't care who they contract it out to.  Rhino should give up making vinyl because they honestly don't know how to do it properly. Vinyl is a record companies' last kick at the can to stay around a little bit longer.  If I saw the end coming, I’d be making an effort not to keep producing garbage.  I have other things to spend $25 on than a piece of garbage from Rhino when I can go to the dumpster for free.

Don't get me wrong, I've purchased enough "new" vinyl from other companies and I'm completely convinced that anyone that currently manufactures vinyl LPs is completely incompetent and useless at their job.  It's just that Rhino vinyl is consistently poor.  I take that back, Rhino is exceptionally good at making poor quality LPs.  And to charge double the price for an album compared to a flawless CD is criminal.

What's also adds to the frustration is that a stack of records I found in my parents' basement (I forgot to take them when I moved out).  Even though they smell a little musty, the old records still play all the way through and are excellent compared current reissues made from 180 Scam Vinyl.  And I didn't get that distracting little voice in my head that says "don't enjoy it too much because it'll skip somewhere" like I do when I'm listening to a Rhino record.

After this latest "vinyl experience", I even cancelled my (at the time) pre-ordered Rolling Stones in Mono vinyl box set and I ordered the CDs instead (excellent, by the way).  I don’t know if my nerves could take 16 albums that may or may not play.  Now that I think of it, I don't think I'll be buying a "new" record again.  Just because I have a little bit of disposable income lately doesn't mean I have to throw it away.

So you kids that think vinyl is cool, you should have been around when you could listen to a record all the way through.  Man, those were the days.