I thought it'd be nice to do something guitar related on the Blog since I haven't in a long time.

So I have 2 cents to throw into the debate of where the "TV" part of the Les Paul TV came from.  There's a couple of theories that are OK but never really did it for me.  The first theory I heard of is that the TV finish, or "limed mahogany" was supposed to be the same colour as the old television sets of the 50s and that's how the TV Model got its name.  Another Gibson book I have says that Gibson made the TV Model to help plug Les Paul and Mary Ford's then-TV spots.  Another theory is the colour was off-white since TV cameras back then couldn't handle white.  I don't buy that because any reflection from another light on any colour with a gloss finish will always be white and that's not really fixing the "white glare" problem.

So here's a theory and what made me think of it:  Gibson was always playing catch-up to Fender since the Telecaster came out and that's where the Les Paul TV borrowed a name.  Where did the term Telecaster come from?  A television.  Where does "TV" come from?  A television.  That might be coincidence if the "limed mahogany" wasn't basically the same colour as Butterscotch Blonde.  A "limed mahogany" body with black pickguard is basically the first Esquire/Telecaster colour scheme.  I know by the time the TV models came out, the Fender was using a white pickguard on their Telecasters/Esquires by then but that's splitting hairs.  And the TV model didn't have an arched top.

What made me think of it?  One day I had out both my Telecaster and Epiphone 61 Special (in TV Yellow) beside each other.  And I said to myself, "Hmmm...Telecaster, TV, Tele, TV.."

Have a look (both aren't mine): 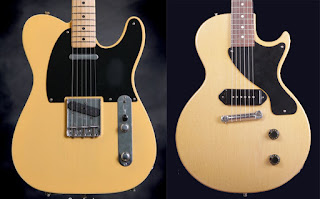