Last Day of WDET for Me

So, I listened to WDET in Detroit for the last time today.


For the past, I don't know how many years, every morning at my day job, I'd stream WDET.  They have gotten a lot worse in the last couple years, but today did it.  What was the last straw?  Stephen Henderson's I'm Boycotting Football that took up a full hour.


How does one waste an entire hour talking about boycotting football?  Spoiler Alert: I never liked football anyways (sorry).  There was a bit of background noise when I first put it on, and then I heard stuff about players aren't allowed to take a knee and I thought, "Are you guys still going on about this?"  And then they were taking screened questions and I heard some broad saying "As a white woman..." and I switched off.


I, like most of the majority of normal people, am getting tired of hearing far-left, virtual signaling, race this/race that in my entertainment mediums.  It's gotten really old and I'm pretty much done with it.  It's not like that in the real world.  In the real world, if people don't like you, it usually doesn't have anything to do with your appearance, so it's embarrassing to hear adults, who should know better, using identity politics.  I feel sorry for someone like Stephen Henderson who's not going to watch football because the players have to stand for the anthem.  Maybe if an NFL owner told his team to go around and massacre random people, then yeah, that's a good reason for a boycott.  Dedicating an hour of air time to bleat out your opinion, fluffed out by put on pre-screened callers who share the same opinion is quite sad and not worth listening to.  And that's the key: it's not worth listening to.


There's another public radio station in Detroit that's on at my place pretty much all of the time and that's 90.9 WRJC.  I think the political thing I've heard them say was "Donald Trump won last night" and that was it.  Beautiful.  I haven't heard anything political since and it's been great.  I'd stream them but it's Classical during the day and I can't be getting sleepy first thing when I get to work.  It's so darn soothing. 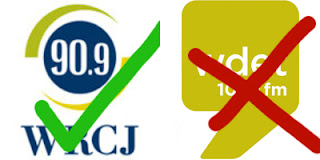 I hate to break it to some people but politics isn't everything.  The last thing it needs to be interjected with is any kind of entertainment.  Some people try to put politics and music together and it's always a big fail.  U.S. Politics seems to be a substitute for reality TV lately.  It’s about as interesting as So You Think You Can Dance.  I get the whole WDET needs listeners and money part, but geeze, find something that'll attract listeners, not repel them.  WDET may as well call themselves a substation of Salon, MTV or Vox.  You can do whatever you want but you won't be making any money off of going far left.  It doesn't sell because that audience thinks everything should be free.

So, WDET and your anchors, I won't be tuning in anymore and I won't be giving you any money at Pledge Week.  This isn’t even a boycott since boycotts have the connotation of going back when things get straightened out but I’m done.
I'll gladly give my $400 to WRCJ instead ($200 per pledge week).  They're likable, they do their job and they've earned it.