I guess that title could apply to Hip Hop these days too but this is about something I just learned about: Slam Poetry.


I was on Twitter yesterday morning, and some math teacher tweeted out that a student made a Slam Poem about the women in STEM and then got accepted into Engineering.  The teacher was proud too.  Teachers.  The teacher's pinned tweet said something like she puts the Fun in Functions.  This is one of the many reasons why I don't talk to teachers.


Anyways, Slam Poetry.  I wanted to find out more about it since I like making humorous, adult-themed rhymes myself, but the more I found out about Slam Poetry, there didn't seem to be too much slamming going on, if you know what I mean. 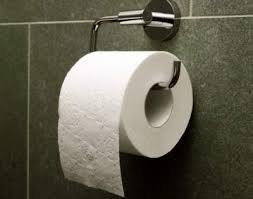 I ran a search on Google and the first site I ended up going to ended up being a Blog called "I Slam Poems and So Can You: A Beginners Guide" (http://outloudhsv.com/blog/2016/1/25/i-slam-poems-and-so-can-you-a-beginners-guide).  I figured it be a good place to start until I saw the first picture of, I'm guessing, the poster of the Blog entry.  More meaningless artsy-fartsy fluff.  These artsy types have to, one day, admit to themselves that they don't really have any talent aside from being able to binge-watch Netflix.


What I got out of that post was that a slam is a competition, so it's a poetry competition.  According to the post, Poetry slam was invented in 1984 by construction worker Marc Smith as a bar game.  Maybe, if construction worker is code for gay dancer. Remember this because depending on where else you read about poetry slams, its origins are completely different.


The basic rules and scoring guidelines are as follows: 1. Poets must perform their own original work – no covers. If a poet breaks this rule, they will be disqualified.  That's why you won't see Amy Schumer at any of these things; 2. No props, musical instruments or costumes. If a poet breaks this rule by using talent, they will be disqualified;  3. Poems are to be timed beginning the moment the poet first speaks. Poems are to last no more than three minutes. For every ten seconds a poet goes over three minutes, .5 will be deducted from their score.  If the poet hits 4 minutes, the timer is to notify the host and the poet will be cut off.


What kept going through my mind was the Beavis and Butthead Buttniks episode where they go to a coffeehouse (Beavis becomes Cornholio) and there's the  one guy on stage who kept saying, "And then my friends, you die".


I watched the embedded YouTube clip on that page and man, is it ever painful.  It doesn't help that the guy who recorded it keeps saying Wow and Nice anytime the two girls say the same thing at once.  But why even keep score at these things?  Everyone's a winner and there's free ice cream at the end of it.


Apparently, slam poems can be funny too.  LOL.  I was having more fun reading the blog entry replacing the word slam with the word shit.  At the end of that post it said, "there are endless YouTube videos you can use for inspiration. Just start looking!" 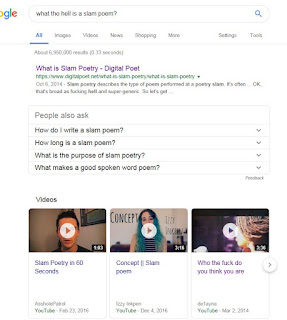 I found a charming video called "Who the fuck do you think you are" by de1ayna.  She probably wonders why people avoid her.  Mind you, this came up in the search results (see pic).  Good one, Google.  I went to YouTube and searched for Slam Poems.  Inspired wasn't exactly the word I'd use to describe my mood since I was wasting many minutes watching 20-somethings complaining about non-important issues, like how Brandon didn't ask Britney to the Semi Formal because he's, like, toxic or whatever.  Maia Mayor (first on the YouTube search results) won't be going on too many dates in the near future.  The next one in the list had the same delivery but her hair was white/blue.  After that, there was a teenager dramatically going on about slavery he's never had to go through.  I don't even want to go near the Special Poetry Slam Intro since I have a bit of class.  Then there was another babbling broad talking about dress codes and pay gaps, etc.  I'm sure the patriarchy was mentioned but I shut it off by then.  Harry Baker wasn't any better but his at least rhymed and he was better than all of the other SJW/NPCs I watched.  I stopped there.  I haven't seen that much poop on a stage since GG Allin.


And then I realized Slam Poetry was exactly what I expected it to be.  Kind like when Disney bought Star Wars, you knew the movies were going to be awful but you had to sit through a couple just so you could do a 'I was right, I knew this would happen'.  Slam Poetry is terrible.  It's self-important, spoiled Millennials reciting their Facebook posts in front of people.  After a while, it did inspire me: never to do anything this awful and lazy myself.  They couldn't even take the time to make it rhyme.  See?  I just made a rhyme and did it without trying.  That's almost two in a row.  There's no flow or any kind of elegance to it.  It's just complaining.  At least I won't have to hear anything about getting women into Slam Poetry since it looks like they dominate that field already.


If you noticed on the screenshot, the first result was from digitalpoet.net and I was just getting to that.


I don't think I've ever been to a website where the owner of the site was so self-absorbed and self-impressed over nothing.  The only skill he has is talking about himself.  He even refers to himself as a Spoken Word Artist.  The thing is, he's not even being self deprecating or funny.  He's completely serious about himself and believes he's edgy.  And that's sad.  I went there because he (Digital Poet; formally Friction) had a What is Slam Poetry page.  His definition wasn't any better: "The term slam poetry is used to describe the poetry performed at poetry slams".  Thanks for that.


"Slams are a perpetual mystery, they are the ace up the sleeve of a man with no shirt."  It's so clever it doesn't make any sense.  I just read earlier that slams are competitions so it's not a mystery anymore and I like my just-made-up 'they are the ace in the hole of the vaginaless woman' better.


"When you do end up at a slam, it's fortuitous - there will always be a piece that grabs you by the collar and pulls you closer, breathes hot words in your face that resonate and kick up feelings. It's no accident..."


Great, it's all on purpose.  I love when opinionated strangers get in my face and bleat out social justice messages.  It shows they really care.


In case you didn't get your fill of conceited flatulence, just a couple more: "As a participant, the story is quite different. For 3 minutes, any image maintained on a regular basis must depart from my physical self as a mutually exclusive carbon copy of my soul takes center stage."  I'm starting to see that even sentences don't have meaning when you're a Spoken Word Artist such as Digital Poet.  "I self-proclaim myself as some level of craftsman with a dignified authority."  I forget, what's that clincial term when someone has an IQ under 80?


So wear your stupidity on your sleeve, get a mental illness haircut, yell your problems and opinions at people, use random words in a sentence and hope it makes sense and even you can be the next Slam Poet Champion of the Universe.  But you'll have to run it by Digital Poet first to see if he's OK with it.


What sums it up better than ever I could is this: https://qnuw.blog/2016/02/27/slam-poetry-sucks-and-all-these-self-entitled-poets-should-throw-themselves-off-of-bridges/
Posted by Gregg Koval at 9:16 AM