In 2014, I bought a Les Paul Traditional that had some issues and after that, I swore I would never buy another Gibson.  Last year, I heard about the management overhaul and most reviews said QC was up so I tried my luck with an SG Jr.  That was a good day because I was, and still am, very happy with it.

So to push my luck again, I thought I'd buy an SG Standard.  I almost went with the 61 series but then I'd have 3 red ones.  And I couldn't justify paying over $2600 Cdn for an SG.  So I went with the Standard in black. 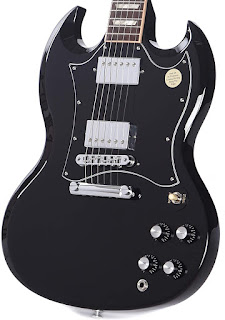 Out of the Box

Out of the box, I'll say it's a 7.  Then again, I got black so that'll hide a lot of blemishes but the gloss is nice.  Like the Junior, the fretboard was really dry.  The action was a little high and the frets, all of them, needed a polish.  Maybe Gibson's not doing the PLEK thing anymore.  After lemon oiling the fretboard, putting the stop bar flush to the body (I wrap the strings over the bar), polishing the frets and a change of strings, things were better.

The neck is rounded, in case someone was looking at getting one of these.  I like it.  The bevels are getting better, more sculpted than they used to be since the 60s and the guitar is very light, lighter than my buddy's Squire Thinline Telecaster.  The Grovers are a nice thing to have.  Unfortunately, the pickups are those God-awful 490s.  Why does Gibson still make these pickups?  They've been shit for years and nobody likes them.  Even before I bought it, I knew I was going to have to replace the pickups.

It comes with the better gig bag but it's still a gig bag.

Everything's good, until I got under the hood

This is when everything glowing comes to a halt.  I must have got a Friday Afternoon Special.  I went to switch out the pickups (with Phat Cats) and I got the pickguard off and, well, look at the pictures.  For one thing, the body wasn't completely finished.  Also, that's not reflection from the lamp, that's a weird white/gray spray around the pickup routes.  And look at the spot under the fretboard: why am I seeing bare wood?  If you're going to stock these things with 490s, why would you not paint the inside?  I could see if there were good pickups that came with it then you'd never have to pop the top off but they aren't.  Final inspection would never notice this shit job so I understand why it slipped by.

I flipped it over and unscrewed the control cover plate.  Two screws were drilled in on an angle.  Took the plate off and my enthusiasm went out the window.  It comes with a Quick Connect system.  That wasn't mentioned on the website, or anywhere else online.  Quick Connects are to make swapping out pickups easier without soldering.  That would be great except they don't make any after-market pickups to replace them with.  Gibson doesn't sell any and hop on Reverb and look up Quick Connect.  Not a lot of replacement pickups, just the guts from an SG like mine with the dreadful pickups.  Why is the Quick Connect still being installed in a new guitar?

Then I got more confused at the fact that, this guitar was made to have its pickups changed, meaning the pickguard will eventually come off, so why would you have a hack paint and route job?  You'd think you'd want to clean that up so you don't have people like me going back to saying that Gibson's stuff is still kind of crap.

So would I recommend one?  Well... not at that price ($1999 Cdn) but if money's no object and you want to dump another $500 into it to make it decent, then sure, why not?  It won't be the best thing you've ever played but it won't be the worst either.  I can salvage this turkey but, unfortunately, Gibson lost another customer.  I probably won't be back in 6 years to try my luck again.  Now I'm just waiting for my replacement pots.