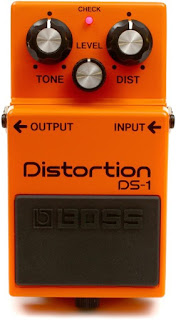 Sometimes I'll stumble across a blog entry or a thread about how to get a Blues sound.  Some are  diplomatic with the "it's a matter of taste" to "get this-this-and-this".  I've been playing for longer than I'll admit but I find the answer to that question is so painfully obvious that I don't know why there's a discussion about it.  Ready for the secret?

There is no Blues sound.  Blues isn't a timbre.

You can play over a 12-bar with anything you like.  Any guitar, any effects (if you use any) through any amp.  That's what makes playing Blues appealing.

I cringe when I read or hear something about a Blues Tone/Sound.  That's the reason I didn't buy a BOSS Blues Driver for the longest time, I thought it was a stupid name but actually, it is a really good pedal.  And if ever there was a Blues Tone, it would probably sound a lot like an acoustic guitar since Blues was around a lot longer than the electric guitar.

Anyone who insists on certain guitars/gear gear for a "blues tone" is an idiot and should probably worry more about the notes than the tone.


Side note:  My Favourite Amp

Oddly enough, it's not an amp, it's my SansAmp.  If I play a song off one of my CDs to someone, I do get the odd compliment on my guitar sound.  That sound is basically a BOSS DS-1 into a SansAmp TRI-A.C.  The key to a SansAmp, at least for distortion pedals, is treat it as if it was a clean amp: no gain and master volume all they way up.  And if I want it a little more Fender-y, I use the BOSS Fender Reverb pedal since it changes the tone a bit.

Here's what a Fender Baja Telecaster into a DS-1 and then into a SansAmp sounds like: https://youtu.be/QtnsAumB1y0